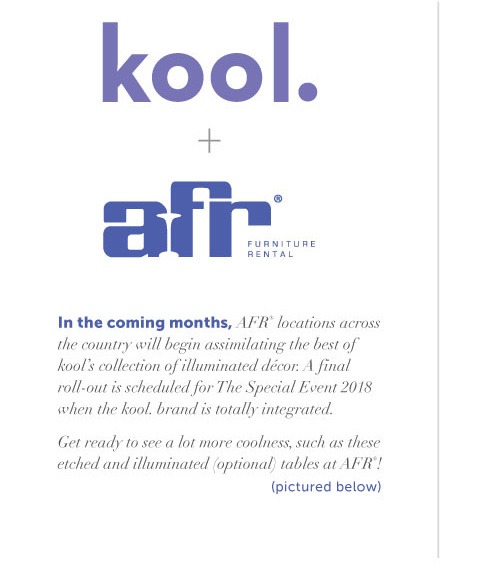 One of the nation’s hottest furniture rental companies has just invested in its own cool factor. Make that “kool” factor. In a move designed to light up the event industry, AFR® Furniture Rental has acquired Phoenix, Arizona-based kool. Party Rentals. For the first time, more than 40 years of luxurious comfort meets illuminated innovation and the results are more than kool for all involved.

For AFR®, the acquisition presents exciting opportunities for expansion. “It’s about making an impact not only in Phoenix, where AFR’s client base has been steadily growing, but on the West Coast,” said Tricia Schmitt, Chief Brand Officer at AFR®. “The timing was right to do this with kool. Party Rentals. We’ve always had a great relationship with Jack Weiner, CEO of kool., and his team. This made sense for both companies.”

“We could not be more pleased with the acquisition of kool. Party Rentals,” said Jerry Hellman, co-founder and co-CEO, AFR® Furniture Rental. "The addition is a great opportunity to add Phoenix to our ever-expanding national footprint. The fantastic team at kool. make this an even more exciting acquisition.”

That same great team will remain in place in both Phoenix and Palm Springs, and Robin Traficanti, will continue in Las Vegas, all under the auspices now of AFR®. And to further ensure that a smooth transition takes place, AFR® is thrilled that kool’s founder, Jack Weiner, will continue as a Brand Ambassador as kool. begins to transition to AFR® in both those cities.